Dream Flights Makes the Sky the Limit for Veterans 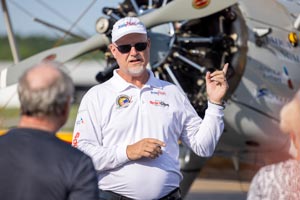 Veteran’s Day has recently come and gone and at The Ohio Masonic Home we are proud to recognize and honor our veterans. Earlier this summer all three campuses in Medina, Springfield, and Waterville, Ohio provided an opportunity for their veterans unlike anything they had ever done before. They went flying! What made the experience even more special was the unique plane they got to fly in.

Dream Flights is a non-profit organization dedicated to honoring seniors who are veterans by giving them the ride of their life. Through donors, community support, and volunteers, veterans are given flights in an open cockpit Boeing Stearman biplane. This is the same aircraft that was used to train many military aviators in the late thirties and early forties, and were particularly important during World War II.

Founded in 2011 by Darryl and Carol Fisher and the Fisher family, their love for seniors and the aviation world inspired Dream Flights. Generations of family and friends, and members of the community, come together to celebrate the achievements and sacrifices made by our seniors. Just over 5,500 veterans have enjoyed these flights – free of charge – over the last decade.

Spread over three sunny August days, more than 20 veterans – both men and women – took to the sky. The light breeze made these days perfect for flying in an open cockpit plane. The 20 minute flights were enjoyed by veterans representing the United States Air Force, Army, and Navy. Spouses, as well as children and grandchildren, celebrated this special day with their beloved veterans. Plans are already under way for The Ohio Masonic Home’s 2023 Dream Flights.

Honoring a Legacy of Service and Sacrifice 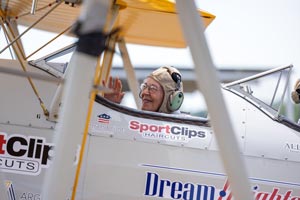 The year was 1951 and Rowena Lindh decided to join the United States Navy. One year after the Korean War began, Rowena was just a teenager when she enlisted. When asked what motivated her to join the service, she shares that she wanted to have her education paid for and see the world.

After completing basic training and technical school, Rowena became an Aviation Electronics Technician. Her job? “I used the radar equipment in a training room…to teach pilots and crewmen how to hunt for submarines,” she shares. In 1954, she even appeared on the cover of “The Navy Guide,” a weekly informational pamphlet. It was nearly 60 years after her time in the Navy before women were allowed to serve on the submarines she trained service members to detect.

You could say the military became a family affair for Rowena. Her late husband, Brother Leonard Lindh, was a U.S. Marine during World War II – nearly 20 years before the two met and were married. Years later, their oldest son Jerry attended the Air Force Academy and became a pilot. In 1992, problems with his aircraft led to Jerry paying the ultimate price, saving many civilians with his sacrifice. The memory of her son inspired Rowena to participate in Dream Flights. She shares, “I imagine he would like for me to go on it, and that’s partly why I am going because I know he would think I was silly to miss the opportunity.”

At 90 years old, Rowena went on the flight of her life with Pilot Darryl Fisher. After 20 minutes flying over Medina and her home at Western Reserve Masonic Community, she landed beaming, with a smile from ear-to-ear. She chuckles as she shares, “I had a good time. It’s a big place, this world.” 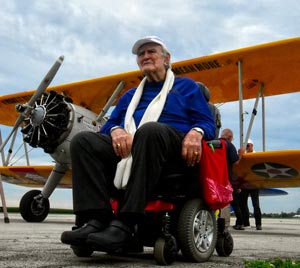 Brother Jim Lehnert spent his early years growing up in Toledo, Ohio. In 1951 he decided to enlist in the United States Air Force where he served four years – from 1951-1955. Serving during the Korean War, his tour of duty took him to Japan and Korea.

Airman Lehnert was a paramedic and worked in air evacuation. He was assigned to a KC-97 Stratofreighter – a four-engine, piston-powered tanker aircraft. He frequently moved injured troops by helicopter as well. Military EMTs, like Jim, provide emergency medical treatment, limited primary care, health protection, and evacuation in a variety of operational and clinical settings – from point of injury or illness through the continuum of military healthcare.

As you can imagine, being a paramedic in combat is a very challenging job with a rollercoaster of emotions. One minute you’re saving a life and the next minute you’re faced with the fact that you can’t save every life. Jim saw hundreds of young troops with missing limbs as he carried and cared for the wounded and dead. These memories have stayed with Jim, the way they stay with our veterans for a lifetime.

Now, nearly 70 years later, Jim got back in a military aircraft in August 2022. This time, no paramedic duties were required as he went on his 20 minute flight with Pilot Darryl Fisher. At 89, with a scooter to help him get around, Jim was concerned that he might have difficulty getting in the plane. “It’s alright if you can’t get me in the plane. Don’t worry, I’ll understand,” he consoled the pilot and crew. Before he knew it, Jim was sitting in the plane and soaring over Bowling Green, Ohio, just 22 miles from where he grew up and 13 miles from his home at Browning Masonic Community. For Jim, Dream Flights was his dream come true.

A Miracle and Two Unforgettable Days 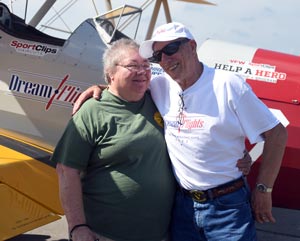 In August 1965 Bruce Gardner married the love of his life, Betty Jane. Excited to be married and still in the honeymoon phase, Bruce was drafted in January 1966. Due to a medical situation, Bruce was able to defer and spend a few extra months with Betty.

Bruce was drafted into the Army 1st Air Cavalry in April 1966 and shortly thereafter headed for Vietnam. He was assigned to the UH-1C, a helicopter used extensively during the Vietnam War. Bruce’s position on board the helicopter permitted him to see everything happening while they were in flight. As a door gunner, he handled tasks related to armament – an extremely important position during war times. The helicopters flew at tree top altitudes from dusk until dawn.

As Bruce was nearing the end of his two year tour, he experienced what had to be the most frightening time in his life. His helicopter’s tail boom was hit by friendly fire and they were shot down. Just 13 days before coming home to his wife, Bruce found himself wondering if he would live to see Betty Jane. The crew was rescued by a slick boat and taken to safety, and the remains of the helicopter were retrieved the following day. Remarkably, everyone survived the crash. Bruce describes their rescue as “a miracle of God.”

As Bruce shared the emotional story of his miraculous return home, he reminisced that it took 40 years to be able to share the story of this frightening day. Following his time in the service, Bruce has flown in a military helicopter and he and Betty Jane have flown in a civilian helicopter.

In August, along with other Springfield Masonic Community veterans, Bruce got to experience a different type of flight. As a thanks for his service, Bruce went on his own Dream Flight. With Betty Jane by his side, Bruce had what he described as a wonderful experience and a day he’ll never forget.